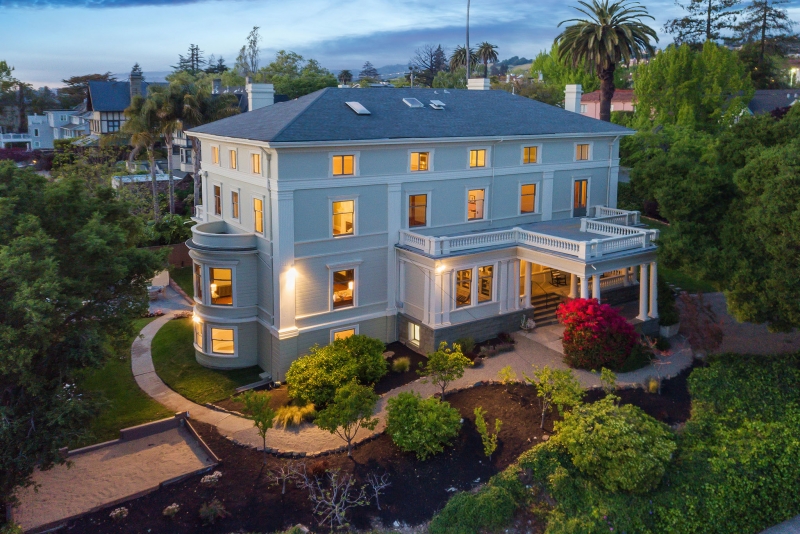 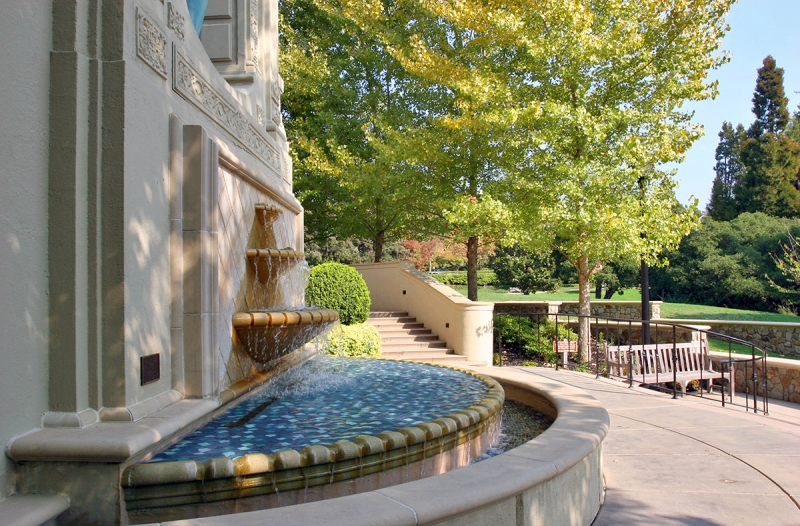 One of Piedmonts most prominent estates, this magnificent colonial revival family home features extraordinary grand scale rooms, exquisite architectural details and great proximity to the town’s best amenities. Everything you need is at your fingertips. Don’t miss this once in a lifetime opportunity to make this landmark legacy property yours.

Grand architectural details abound in this stately Colonial Revival home.  Doric columns and rusticated stone frame the inviting front porch and porte cochere with its graceful balustrade and balcony above.  Elaborate window frames, acanthus molding and dentils under the eaves, and tall fluted pilasters at every corner, most with elaborate Corinthian capitals, provide more original architectural features.  Architect Walter J. Mathews designed the windows to decrease in size from tall windows on the main floor to smaller windows in the third level.  Built in 1901, before the Bay and Golden Gate bridges were built, the house still provides views of San Francisco Bay.

Architectural details continue as you ascend the wide steps and enter the vestibule to the glazed front door.  The spacious entry hall with box beam ceiling is paneled in high wainscot with fluted pilasters extending to the ceiling.  To the left, the expansive living room spans the depth of the house.  It is filled with natural light from tall windows on the main level and a curved glass bay window looking to the west.  The ornate, wood burning fireplace has a large mirror, columns, dentils and Craftsman tile, and fills the far wall with a glassed in porch beyond.  Substantial wood pocket doors with elaborate hardware can enclose the living and dining rooms - a reminder that the original owner was in the hardware business.  Floors in the entry hall and living room are herringbone parquet.  The remaining floors throughout the house have a dark inlaid trim with a meander detail in the corners.

The library or study is immediately adjacent to the main entry and has built-in book shelves with glass-front doors.  Is tall window brings in lots of southern light.

The dining room across the entry hall exhibits the same high wainscot as the entry hall and the same tall windows as the living room.  The handsome buffet has a mirrored back, shelves for display, velvet lined drawers for silverware and cabinets for storage, some with narrow shelves for table linens. The coal burning fireplace has a marble surround and graceful curved brackets.

Adjacent to the dining room, the substantial butler’s pantry offers enormous storage space with glass fronted cabinets above the counters and large cabinets below.  There’s a small sink and even a closet with hooks for hanging aprons.  Don’t miss the call box that summoned the butler.  The kitchen beyond has black counter tops and a large pantry.  There are several small rooms off the kitchen; one is a small breakfast room, and another room has a marble counter for baking.  This combination of small rooms offers an opportunity to open this space and create a modern, family kitchen.  More doors from the kitchen open to the garden and suspended circular back stair case.

Returning to the entry hall, a small wood burning fireplace warms the alcove where doors on the left open to the stairs down to the ballroom and doors on the right lead to the back stairs.  Similar in size to the living room above, the ballroom has a bay window with curved glass, doors to the garden and a coal burning fireplace to warm the room.  The original powder room with marble sink conveniently adjoins the ballroom.  Several smaller rooms including a laundry room with large tub and a work bench room offer lots of storage space in this lower level.

When built, the house was originally heated by eight fireplaces.  Wood burning fireplaces heated the living room and entry hall.  The dining room, ballroom and four upstairs bedrooms were heated by coal burning fireplaces.  The basement still has the original bins for the coal and wood that originally heated the house.  The current owner’s children fondly called these bins the “horse stalls.”  Windows above these bins allowed direct delivery of coal to the basement.  Radiant heat has replaced coal to heat the house today.

The main staircase with its stately square newel post and paneled wainscot ascends to the second level with five bedrooms and two and a half bathrooms.  The master suite to the left has a generously sized bedroom with a fireplace, French doors to a balcony and smaller closet.  The coal burning fireplace has white tile, a wood surround with a mirror, slender columns and delicately carved wood detailing.  The adjoining dressing room has a large closet for hanging clothes, built-in drawers with a clever drop-front for access, and large cabinets above for bulkier items.  The master bath has a tub and stall shower and opens to a bonus room, possibly a former nursery or sewing room.

Four more large bedrooms open to the upstairs hallway.  The second and third bedrooms also open to a shared bathroom with pink tile, probably updated in the 1930s.  The third, fourth and fifth bedrooms have coal burning fireplaces.  The fourth bedroom has a half bath with an original marble basin with charming shell detail for holding soap.  The possible fifth bedroom/den has built-in book shelves and French doors that open to a balcony with balustrade.  Generously sized windows in all the bedrooms bring in lots of light and offer some views of the bay.  The ornate door knobs and metal covers on the fireplaces remind you again that the original owner was in the hardware business.

Only the back stair case continues to the uppermost level where the small rooms were designed as servants’ quarters.  The western portion is a large game/ family room with a galley kitchen with refrigerator, range and sink.  The remaining rooms offer four additional bedrooms with closets and two bonus rooms (without closets) and two full bathrooms.  The views from the smallest windows on this level are the most expansive.  This upper level can also be an au pair or second unit space.

The garden has several stately palms, lawns and a slate patio.  The garage, porte cochere and driveway provide plenty of off street parking.  When the house was built in 1901, the gardens were much larger and extended 190 feet down Magnolia Avenue.

Andrew Lowndes Scott was the vice-president of the successful hardware business in San Francisco when he hired Walter J. Mathews to design this house in 1901.  On July 27, 1901, owner A. L. Scott, builder Charles A. Littlefield and architect W. J. Mathews published a contract to build a two-story house at the corner of Hillside and Piedmont (now Magnolia) Avenues for $ 10,655.

Architect Mathews designed this house in a time when it took a staff of servants to run a house of this size.  He created six small rooms and a larger living room space in the top level for servants, back stairs to access each level of the house and a small servant’s kitchen.  The small breakfast room may have been a dining space for servants. The coal burning fireplaces would have been laid each evening to warm the upstairs bedrooms.

Mathews was a well-regarded architect who established his office in Oakland in 1886 and was the Oakland city architect in the 1890s.  Mathews is known for designing several prominent residences, office buildings and churches in Oakland and San Francisco.  Mathews’ design for the house at 412 Monte Vista, recently converted into condominiums, resembles the house at 365 Hillside in its Colonial Revival style with graduated window sizes with elaborate frames, columns at the entry and detail under the eaves.

Andrew Lowndes Scott was 38 years old and vice-president of a wholesale hardware company when he built this house for himself, his wife Berdita and 5-year old son, Lowndes Jr.  The Miller, Sloss & Scott Company of San Francisco dealt in hardware, tin ware and sporting goods and merged in 1901 to form the Pacific Hardware and Steel Company, adding iron and steel to their inventory and creating the largest mercantile corporation on the Pacific coast.  The company profited greatly from the sale of iron to rebuild San Francisco after the 1906 earthquake.

In 1908, the Scotts left their home in Piedmont due to Lowndes Scott’s ill health.  They lived in Redlands for two years while he recovered but kept possession of the house.  The 1910 census indicated they were living in San Mateo.  Fully recovered, the Scotts took a tour of Europe in 1912 and returned to their home at 365 Hillside.  Berdita entertained lavishly in their home on Hillside Avenue and was involved in local charities including Fabiola Hospital, the Red Cross and other charities supporting the World War I effort.  They lived here until at least 1917.

By 1920, the Charles S. Morse family was living at 365 Hillside.  Charles Morse was the owner of a rice mill in Sacramento and known as a “captain of industry.”  He was a successful pioneer in rice milling when rice was becoming a dominant crop in the Central Valley.  He and his wife Millie had a large family with three teenage sons and a daughter.  When their son Clarence married, he and his bride Sue came to live here too.  Charles and Millie Morse lived here until at least 1937.

In 1940, Dr. Theodore C. Lawson, a surgeon, and his wife Louise brought another large family to live at 365 Hillside.  The Lawsons had three sons and three daughters and celebrated several engagements and weddings here.  Dr. Lawson died in 1955, and Mrs. Louise Lawson continued to live at 365 Hillside until at least 1972.

Piedmont, a two-square-mile city within the borders of Oakland, was incorporated in 1907 and was known then as “The City of Millionaires” because there were more millionaires per square mile residing there than in any other U.S. city. Today, their large, estate-like homes are still standing in the heart of Piedmont, reminding residents of its glitzy past. Homes in Piedmont range from those estate-like homes in central Piedmont with expansive grounds to more modest homes on the edges of town. Well-manicured landscapes prevail and the city’s stringent permitting guidelines ensure all of the homes maintain their original flavor.
The commercial area of town is small, featuring several banks and one gas station. Mulberry’s Market, a specialty food store with ready-made meals, caters to gourmet taste buds and is the frequent morning coffee stop for parents and after-school hot spot for kids. Piedmont’s proximity to Oakland’s many big-city amenities ensures Piedmonters will not miss out on the latest restaurants or first-run movies.
The sense of community is strong, as witnessed by the large turnout for the annual Fourth of July parade that happens each year down Highland Avenue. The Piedmont Recreation Center offers a central gathering place for residents. Available for rental, it is the frequent setting for community events and parties. The beautiful grounds provide a wonderful place to hang out and play, and the wooded trail connecting the Center to the high school is the best place to take your dog to play.
A casual carpool zone on Oakland Avenue, along with proximity to Bay Area Rapid Transit (BART) and Alameda-Contra Costa Transit District buses, offer workers convenient commute options. Pride in community involvement and village living are just a few of the reasons people love to live in Piedmont.